Double standards can make it extremely difficult for male survivors of sexual abuse to be taken seriously, and to seek and/or receive support they need for their trauma. When the media presents images of men being raped by women as a good thing because “He got lucky,” it makes male survivors feel embarrassed and ashamed of what they endured. In this article I’m going to start analyzing double standards in fiction involving sexual abuse and how it harms everyone regardless of gender. They reinforce ideas like men are the main perpetrators of abuse, or perpetuate excuses like “Men can’t help it” or “Women always want sex.” These oversimplify the complexities of why sexual abuse happens.

Then there are the moments when rape, regardless of gender, is played for comedy. Like in “Family Guy,” where supporting character Quagmire’s entire shtick is he’s an unrepentant rapist and sex offender. He’ll violate anything with or without a pulse and knowingly spreads dozens of STDs. In one poorly conceived sequence he assaults and rapes Marge Simpson. After having consensual sex with her, he kills all the Simpsons.

I want to discuss cases of double standard abuse in comics and how they can reflect poorly on real life victims and the ways the victims see themselves, or how the abuse affects their self-perception. I’ll begin with a well known incident among the DC Comics fandom involving one very popular character, Nightwing from “Batman” and “Teen Titans.”

In “New Titans,” a group of futuristic time travelers called the Team Titans arrived in the present to murder Donna Troy before she gave birth to her son, who will grow up to be an all-powerful tyrant named Lord Chaos. One of the Teamers, Mirage, was a shape-shifter and in her time period was dating Nightwing. The present-era Nightwing was dating Starfire, and the Teamers trapped her so Mirage can impersonate Starfire to get information from the New Titans. Mirage, disguised as Starfire, committed rape by fraud by sleeping with Nightwing. Rape-by-fraud is when someone is tricked into having sexual relations with another person, believing they are someone else.

What’s especially disturbing about this is that in a later issue, when the two Titans groups fought each other Mirage, undisguised, made an emotional plea with Nightwing to call a ceasefire. After the dust settled, Mirage gleefully revealed she tricked Nightwing into sleeping with her while disguised as Starfire, and laughed at the thought of having destroyed his relationship with the real Starfire. None of the other Titans were sympathetic to Nightwing, especially Starfire, who was angry Nightwing believed Mirage was her on appearance alone. So Nightwing had to defend himself for GETTING RAPED. Overall fans felt this was poor writing, and that Nightwing and Starfire were acting stupider than they really are for the sake of petty rape drama. 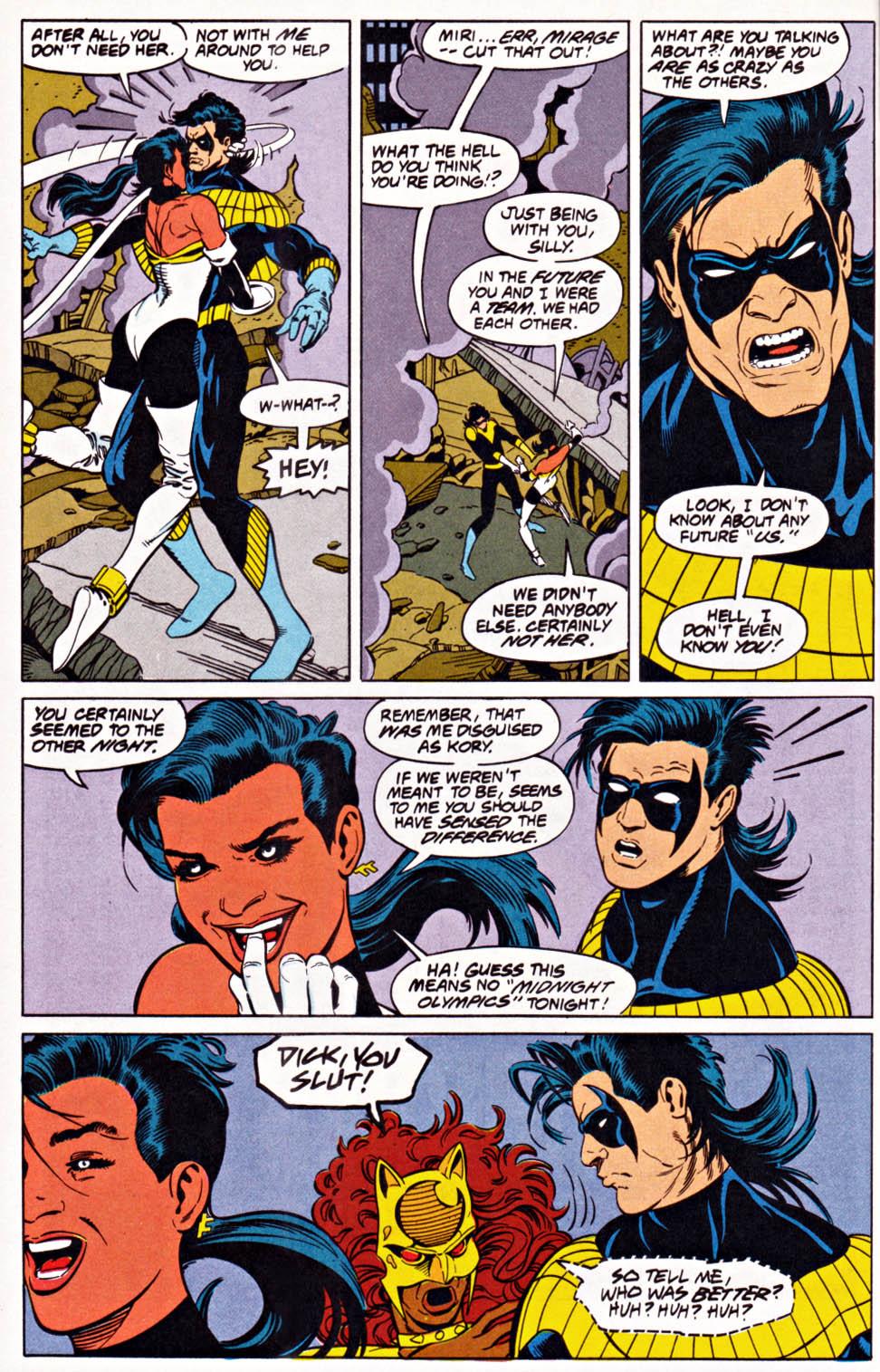 For sake of clarification, the older Dick Grayson will be only be called Deathwing. Mirage is reunited Deathwing, only he’s been driven insane and turned evil. During their first night alone together after his transformation Deathwing brutally rapes and tortures Mirage. The double standards are painful. When Mirage raped Nightwing, there was no force or threats made, and no one offers Dick any comfort after learning he’s been used. Mirage was never punished for it. When Deathwings raped Mirage, it’s like a scene from a horror movie. Her teammates were supportive and tried convincing her it wasn’t her fault despite her insistence she’s to blame. Honestly, it feels like Mirage getting raped was her punishment for what she did to Nightwng, which brings about problematic implications of the “Rape As Punishment” trope. Supposedly, despite the lack of reaction in the story, Mirage was unpopular with readers because she raped Nightwing, who still remains one of the most beloved characters owned by DC. It’s possible the writers planned for Deathwing to kill Mirage during or after the rape, but for some reason editorial wouldn’t kill her off. She not only lived, but remained a Titan for several years and no one, not even Nightwing’s closest friends, have any problem with her raping him. 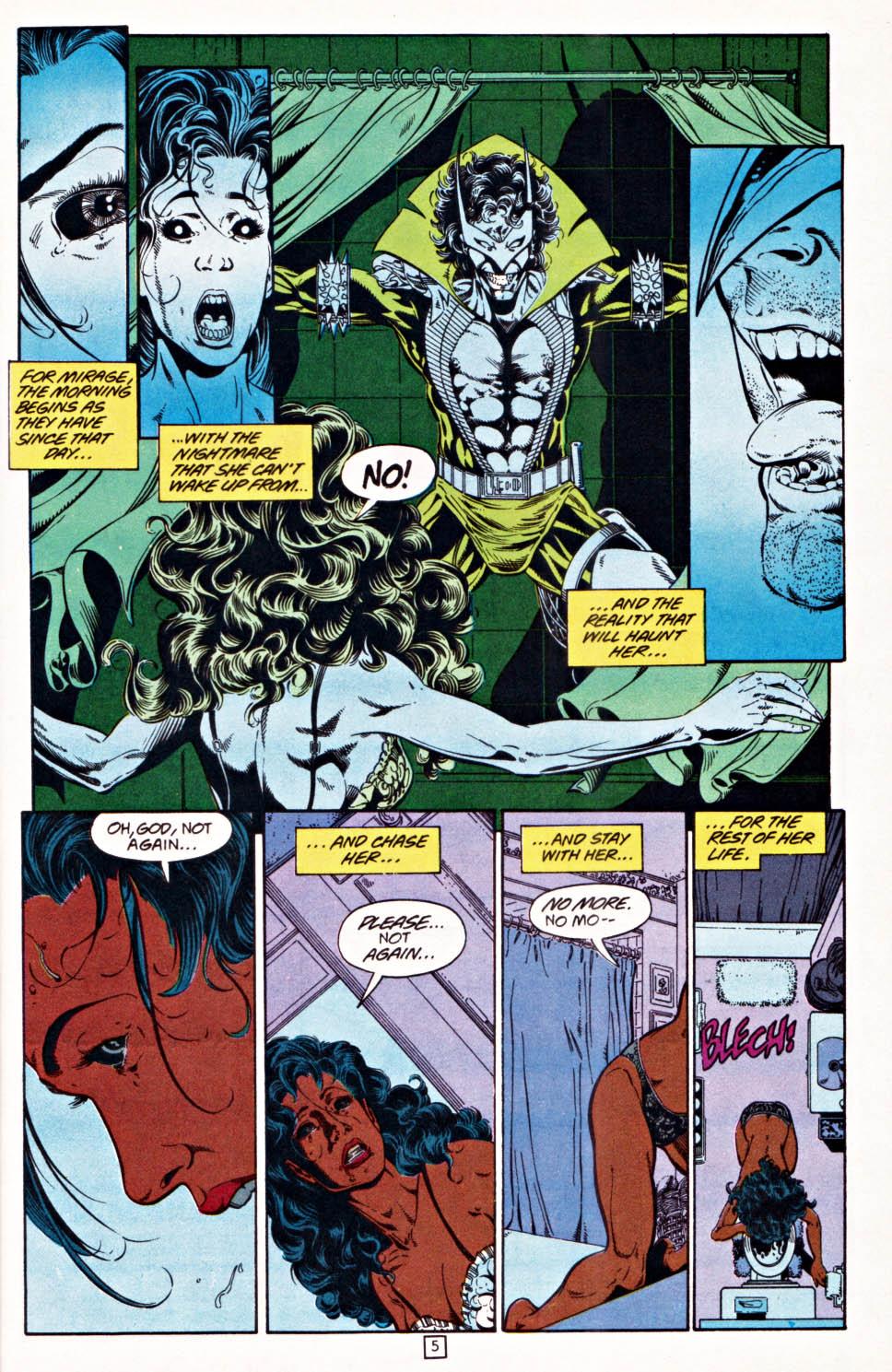 On one hand we have a violated man who gets mocked and judged. Then the woman who raped him is herself raped, and acts like this was punishment for her past deeds. You have male survivors feeling like their abuse doesn’t matter, and female survivors left to wonder if their rape was punishment for past actions. Double standards hurt EVERYONE regardless of age, race, or gender.