Home → Blog → Put In Ink: Rape of the Amazons by Jude Deluca

Put In Ink: Rape of the Amazons by Jude Deluca 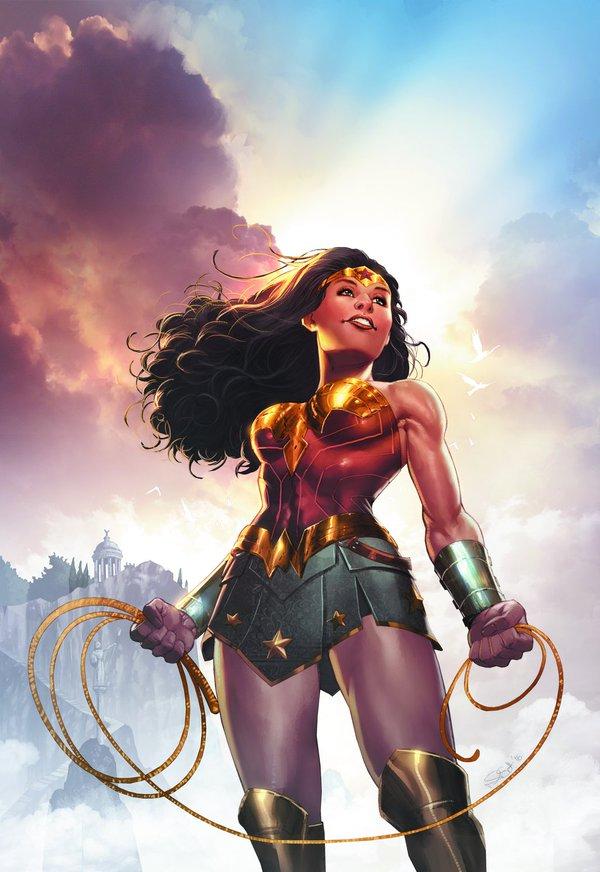 For my next article for Endangered Bodies, I’d like to branch out a bit and talk about Wonder Woman. Many of you might know her as one of the premier superheroines of American culture. She’s a literal Amazon princess born of clay, the daughter of an entire civilization of women, a hero who wields a magic lasso that compels people to be truthful, and a figure of strength and grace. In my articles about how rape’s portrayal in comics affects public and private thinking on rape, I’ve talked about rape being used for shock value. In this case, I’ll be talking about how a rape retcon was used to undermine Wonder Woman’s character and the culture she came from.

In 2011, DC Comics rebooted their comics as part of the “New 52” Initiative, an attempt at starting their shared superhero universe over from scratch. The New 52 “Wonder Woman” volume was originally written by Brian Azzarello and illustrated mainly by Cliff Chiang. The reigns passed to husband and wife team Meredith and David Finch as the writer and penciller respectively, before “Wonder Woman” was again rebooted as part of “DC Rebirth.” Critics reviewed favorably on Azzarello’s run for his dark themes and new take on visiting the Greek mythological aspects of Wonder Woman’s character. Said themes included Wonder Woman being rewritten into a bastard child of Zeus and the Amazons were framed as a society of unrepentant rapists and murderers.

The article link above goes into detail regarding how Azzarello revealed over the centuries the Amazons propagated by finding sailors they could have sex with, rape them in order to conceive children, and then kill the sailors when they were finished. If a child was male, they were disposed of moments after birth. This was something Wonder Woman apparently never knew before dealing with the Greek God Hephaestus, who took in the abandoned Amazon sons and spared their lives. For five years this was canon for the Amazons until Greg Rucka, writer for the current run of “Wonder Woman” as part of “DC Rebirth” changed the story. The current two “Wonder Woman” storylines, “The Lies” and “Year One,” have been systematically undoing Azzarello’s rendition of Wonder Woman and her culture. “Year One” is a retelling of Wonder Woman’s origin which reestablishes her culture closer to what it was during the Golden Age of Comics and George Perez’s famous run from the late 1980s. “The Lies” reveals the New 52 Amazons are impostors, created in some intricate plot to rewrite Wonder Woman’s memories and deceive her. Rucka does a good job of highlighting everything wrong with the New 52 Amazons in one page, where Wonder Woman’s ally and sometimes love interest Steve Trevor is subtly threatened by an “Amazon.” 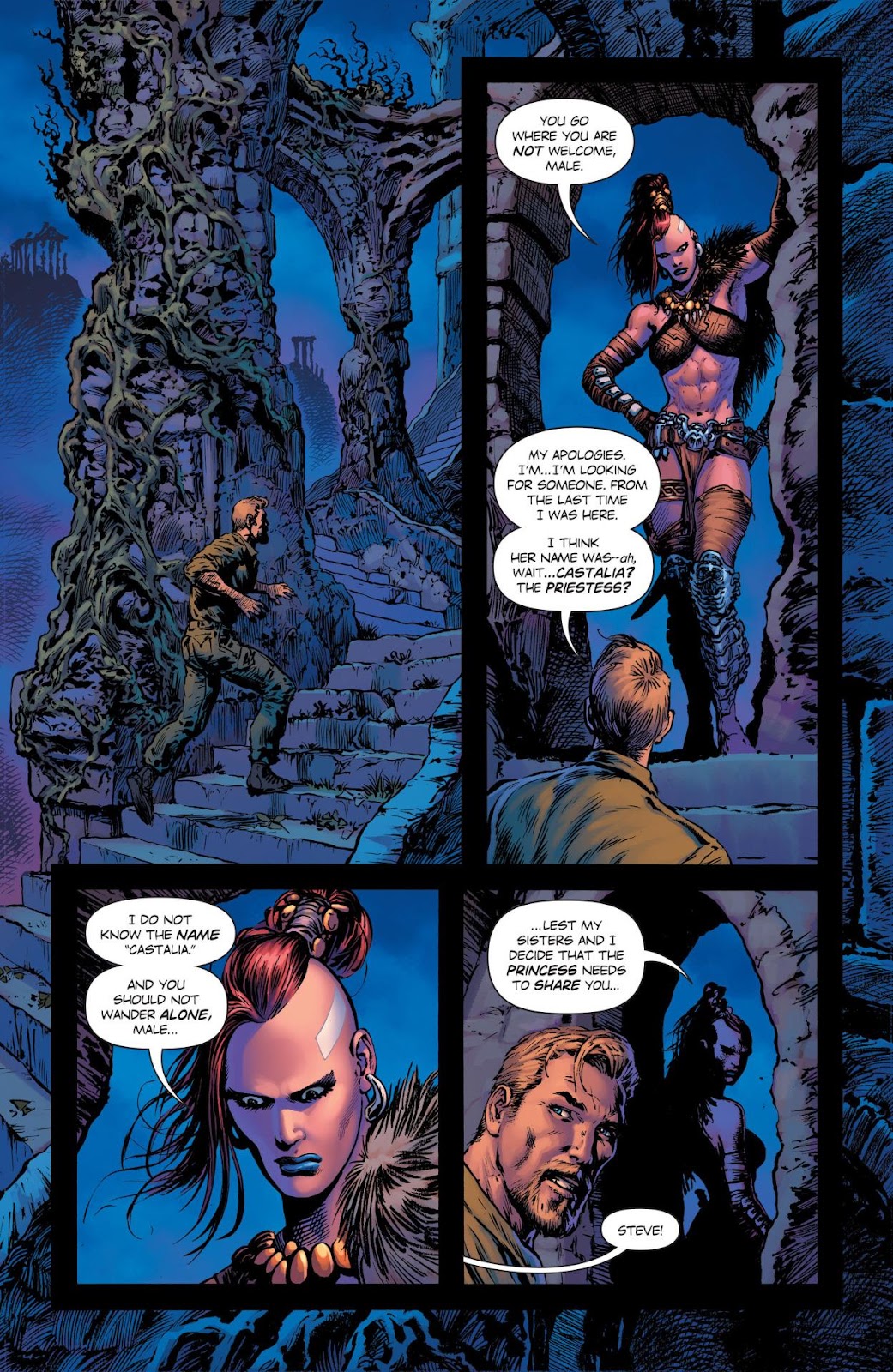 Rucka has Wonder Woman deliver commentary on the wrongness of the New 52 version of her homeland Themyscira, calling the island a parody of her home. But why was Azzarello’s take on Wonder Woman’s culture and backstory considered so “Wrong?” People argued this was a more historically accurate take on the Amazons, while others felt this was gross misogynistic shock value and undermined Wonder Woman’s history.

Wonder Woman was created by William Moulton Marston, his wife Elizabeth, and their live-in polyamorous companion Olive Byrne. Her culture was built on the idea of “Loving submission.” Wonder Woman and the Amazons of Paradise Island were a technologically advanced civilization of strong, intelligent, and compassionate women who believed in love and peace but were willing to fight if needed. 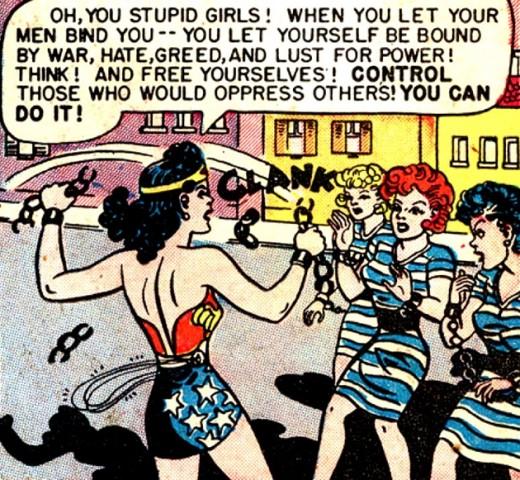 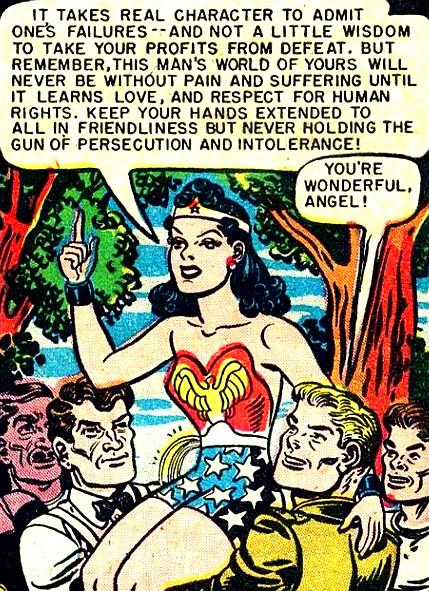 The subtext in Marston’s writing for “Sensation Comics” portrayed the Amazons as sexually active women who engaged in consensual bondage, including Wonder Woman. The only conceivable reason why she got tied up so much during the Golden Age was because she enjoyed it. The Amazons even ran a prison rehabilitation center called “Transformation Island” that utilized a device called a “Venus Girdle.” Prisoners would be forced to wear the Girdles, making them feel love and compassion, and were removed once the prisoner developed the ability to feel those emotions on their own. The logic here was the prisoners needed to submit to loving authority in order to become better people. To drive the point home, many of Wonder Woman’s villains were women driven by jealousy and spite, misandrists, slavers, Nazis, sociopaths, and women who willingly perpetuated sexist institutions. Marston’s writing was surprisingly liberal for his time (although it admittedly featured some racial caricatures common to the era unfortunately), and even featured Wonder Woman delivering an Aesop that there’s nothing wrong with a woman choosing to submit to service for someone else if that’s what she’s into, just as long as she’s not being abused. 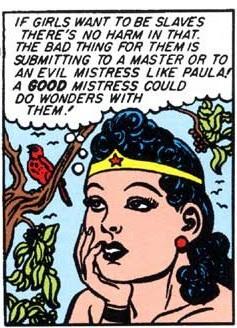 Even when other writers downplayed the bondage angle in Amazon culture, no one went to the lengths Azzarello did. The misogyny present in making the Amazons rapists is because it completely undermines the core of Wonder Woman’s character. It takes a character whose culture was both sexually liberated and civilized and turns it into a culture sustained by rape and misandry. It perpetuates the double standard thinking that “Women can rape but men can’t,” and the idea that an all-female society is impossible or must inevitably carry some dark secret. It diminishes Wonder Woman as a feminist icon by making her hypocritical. The Amazons themselves become hypocrites because many were victims of sexual abuse before living on Themyscira, including Wonder Woman’s mother Queen Hippolyta, so there’s also the stereotype of rape victims being destined to mimic their abusers. How can Wonder Woman stand for love and equality when she’s champion of a culture that’s about anything BUT love and equality? As an abuse victim, I felt Azzarello’s revision was an insult to Wonder Woman because it undermined her feminism and grossly mocked the sexual undertones of her original story. Rape shouldn’t be part of Wonder Woman’s backstory as it diminishes the ideals she stands for.